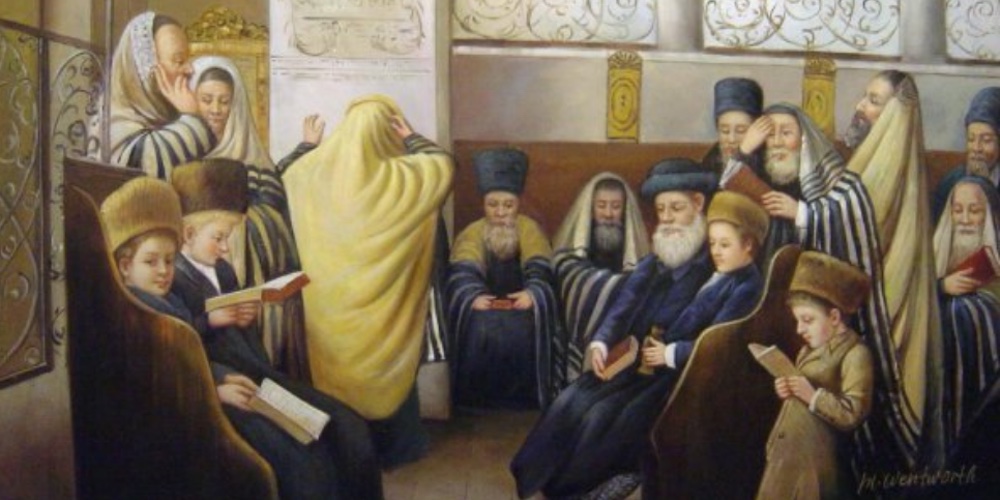 The liturgy is filled with reference to God in multiple ways. He is at once the God of thought, the Lord of peace, Merciful, Father, Sovereign. Indeed the pages of the Machzorim and our prayer books are the most magnificent, majestic compendia of poetry with the Almighty as their subject not only on every page but on virtually every line. On Yom Kippur, accompanied as it is with the most stirring, sometimes haunting of melodies it is the line from Leonard Cohen’s Hallelujah that also comes to mind as we “stand before the Lord of Song”.

There are those who have argued that the challenge prayer presents should be abandoned altogether. To affirm our peoplehood, their argument goes, we should engage in communal study or a programme of social action instead. To be sure the language and imagery evoked in our prayer books may well feel alien and obscure but to reject a path of prayer would be equivalent to a body jettisoning its soul. This is because prayer is the very lifeforce of our tradition. It is the nurturant wellspring of Judaism itself.

Prayer which begins with praise awakens us to the miracle of existence. It connects us to the memories and hopes of past and present communities and enables us with a stake in the future too. It invites us to stand on the shoulders of the spiritual giants of our tradition and reimagine their profound encounters for ourselves. It links us in a chain of mortal generations to immortal divinity.(1) Prayer enables us to find our voice through self-scrutiny (or heshbon ha nefesh) and gives expression to the full gamut of human emotion – our joys, yearnings, fears, pains, resentments and sorrows.

It is the line from Leonard Cohen’s Hallelujah that also comes to mind as we “stand before the Lord of Song”.

There are those who find the set forms and formulas of our traditional communal prayers stultifying. A call for introduction of more spontaneity has usually fallen on deaf ears. We might have shortened our services following the pandemic but the extent of our rabbinic leaders’ imaginations for conducting any real innovation is sadly limited. We are bereft of any serious counsel as to how to navigate the contours of the raging theological debates that occur throughout the pages of our prayer books. Our leaders too often fail to convey the importance of dwelling in paradoxes that prayer can enable. We also lack guidance as to how to achieve proper focus of the self in prayer or even the space to talk about our experience in prayer. The result of all this is that many are turning away from more traditional establishments and seeking meaningful alternatives readily accessible elsewhere.

There are many strands of innovation within the tradition. Rabbi Menah Lonzano in his Derekh Hayyim shares that ‘’If it were possible to worship without words, if the heart could be offered alone – this would be sufficient to fulfill the commandment of prayer’’. A radical story attributed to the Baal Shem Tov goes to the core of what ‘offering the heart’ means:

A certain villager used to pray on the Days of Awe in the House of Study of the Baal Shem Tov. He had a child whose wits were dull and who could not even read the letters in the prayer book, much less recite a holy word. His father never brought him along to the city, because the boy was completely ignorant. But when the boy became Bar Mitzvah, his father took him with him to the city for Yom Kippur, so as to be able to watch him and keep him from eating from simple ignorance.

Now the boy had a little flute on which he used to play all the time when he sat in the field tending his flock. He took the flute with him from home and put it in his coat, and his father did not know about it. The boy sat in The House of Prayer all Yom Kippur without praying, because he did not know how. During the Additional Prayer he said to his father. “Father, I want to play the flute.” His father became terrified and spoke sharply to the boy. The boy had to restrain himself. During the Afternoon Prayer the boy repeated again: “Father let me play on my flute.” Seeing that the boy wanted badly to play on his flute, his father said to him “Where is the flute? The child pointed to the pocket of his coat.

The father therefore held the child’s pocket in his hand, to keep the boy from taking out the flute and playing on it. Holding the pocket with the flute in this way, the man stood and prayed the Closing Prayer. In the middle of the prayer, the boy forced the flute out of his pocket and blew a blast so loud that all who heard it were taken aback. When the Baal Shem Tov heard the sound, he shortened his prayer. After the prayer the Baal Shem Tov said: “With the sound of this flute the child lifted up all the prayers and eased my burden. For this child does not know anything but by dint of his seeing and hearing the prayer of Israel all of this holy day, the prayer’s holy spark kindled a fire in him and the flames of his longing burned higher and higher until his soul nearly expired. Because of the strength of his longing he played the note of his heart truly, without any distraction, for the sole sake of the Name of God. Now the pure breath of his lips was very acceptable to Him and by this means all the prayers were lifted up.(2)

The child in the story demonstrates that in the words of Bahya Ibn Paquda ‘’our object in prayer is but the consummation of the soul’s longing for God’’. Via the beautiful notes of the flute that he offered in humility and not the codified language of the prayer book that remains elusive to him, he is able to find a true expression of his voice.

We lack guidance as to how to achieve proper focus of the self in prayer or even the space to talk about our experience in prayer.

Prayer is not only about giving voice to the soul’s thirsting for the Divine. It is more than a plea for mercy or the manifestation of our fathomless gratitude or even sheer wonder at existence. In the midst of our daily clamour and tumult, prayer enables us to still the mind and attune to a different frequency, far removed from our world of instant gratification. It is an exercise in active and deep listening. And in so doing we encounter in the words of Abraham Joshua Heschel ‘’the mystery and grandeur of the concern of the infinite God for the finite’’(3) human being. In listening we hear God’s call.

There is a moving passage from the Book of Samuel in which Samuel is undergoing a tutelage in the art of listening. Late at night, having heard his name called on three separate occasions, Samuel had thought it was Eli, under whose service he was in that had reached out. After the third time, Eli understood that it was indeed the Lord calling the boy and so advised: “Go lie down. If you are called again, say, ‘Speak, LORD, for Your servant is listening.’’(4)

God calls to us all. Whether we hear that call depends on how actively we are listening. It was the Kotzker Rebbe who once said “Where is God? God is only where you let Him in.” Prayer is the vehicle we have to let Him in and honour our calling.

There is a paradox that lies at the very heart of the liturgy over the Yamim Noraim involving the Unetaneh Tokef prayer. We enter the courtroom of the world. At the beginning we are reminded that today our fate is being written, as the verdict is, of who will live and who will die is determined by the Heavenly Judge. The congregation, almost in protest then burst in unison with three important words: ’Teshuvah, Tefillah and Tzedakah remove the evil of the decree’’. The die seems cast and yet it is not quite cast.

It is in an experience of our own existence as a tiny speck in the sea of eternity that true humility may be found.

Perhaps the answer as to how we resolve the paradox at the heart of the Unetaneh Tokef is contained in lines immediately following the communal declaration. There we are reminded of our insignificance: ‘’A man’s origins is from dust and his destiny is back to dust.’’(5) It is in an experience of our own existence as a tiny speck in the sea of eternity that true humility may be found, an ‘’it-He ‘’ relationship(6) may be established and transformation can begin. It is worthy of note that many of our founding ancestors encountered the importance of diminishing their sense of self as they stood in front of God. Abraham acknowledged that he was but ‘’dust and ashes’’(7) prior to going on to argue with God about saving the cities of Sodom and Gomorrah. Moses, when responding to the call to redeem the people of Israel questions: ‘’Who am I that I should go to Pharaoh?’’(8) Prayer then and the radical alteration that it entails can only proceed with genuine humility.

Before Rosh Hashanah, we argued in Tzedakah and Religious Experience that of the three important areas of focus Tzedakah prevailed above them all. As we now dwell on prayer, which so ‘’depends upon the total moral and spiritual situation of man’’(9) I wonder whether it is in fact not Tefillah above Teshuvah and Tzedakah which is of paramount importance. As Heschel has said: ‘’For prayer to live in man, man has to live in prayer.’’(10) From this perspective it is Tefillah that leads to continual Teshuvah and Tefillah also that leads to our righteous deeds.

As we stand before the Lord of Song this Yom Kippur, may He hear our prayers, may we also hear His call to us and may we all be written in the Book of Life.