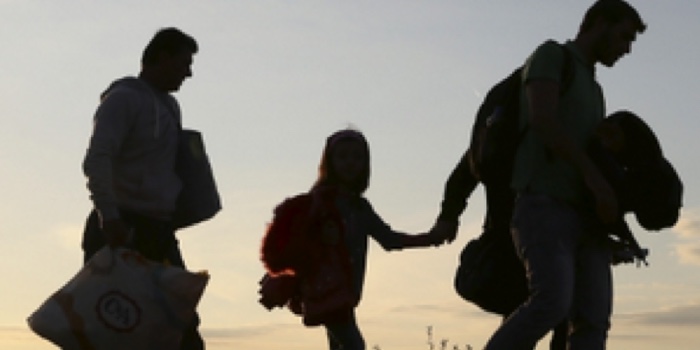 As Joe Moran has argued recently in an article in the Guardian ‘’Covid has shone an unforgiving light on our already strained relationship with strangers.’’(1) Surveys indicate a decline in social trust and intensified feeling of enmity towards outsiders. George Floyd’s line played out before the world spoke in so many ways to our troubled age and for all of us when he said; ‘’I can’t breathe!’’ As post-lockdown life resumes and etiquette towards others needs to be relearned we are more wary as we eye passers-by with suspicion and question what were the basics of human interaction – how should we stand? Is hand-shaking now over?

In fact relations with strangers have changed significantly as the sociologist Norbert Elias contends since the rise of the nation state. In pre-modern times strangers were much more likely to eat together at long communal tables, share a bed for reasons of space rather than sex and even urinate and defecate in front of each other. All this is a far cry from the token ways that we have come to acknowledge strangers in our modern world with the kind of benign indifference that led sociologist Erving Goffman to coin the term ‘’civil inattention’’ referring to our fleeting looks and tiny nods of the head as we pass others. So much of our contemporary life is even faceless altogether as apps, algorithms, passwords and self-checkouts have removed human interaction entirely.

We are such inescapably social creatures that we can be wounded, or enraptured, by a mere glance from another person.

As the pandemic has shown, our world is interdependent as never before and the need for ever greater cooperation is paramount. We have discussed previously that the loneliness pandemic abates.(2) Our global refugee crisis also shows no signs of slowing with recent figures from the UNHCR indicating that there are 26.4million refugees, more than half under the age of 18. Cultural theorist Judith Butler in her book Precarious Life has suggested that we are linked to each other through our shared vulnerability. Our skin is porous, our airways are open and our senses are sharp. This exposes us not just to other people’s pathogens but to their desire, their violence, their neediness, their gaze. We are such inescapably social creatures that we can be wounded, or enraptured, by a mere glance from another person. “We’re undone by each other,” Butler writes. “And if we’re not, we’re missing something.”(3) How then can we recover the command that resonates throughout the Bible ‘’to love thy stranger’’?

Joe Keohane’s new book, The Power of Strangers: The Benefits of Connecting in a Suspicious World shares that hospitality towards strangers was seen as a sacred obligation in antiquity. Citing archaeological evidence he shows that the first human settlements of 10,000 years ago valued stranger travellers for the trade and news that they bought with them. The opening of Genesis chapter 18 recalls one of the most moving gestures of hospitality ever recorded in literature as Abraham, recovering from his circumcision nonetheless, rushes out to greet his three visitors, bows down to them before offering sustenance and refreshment.

The very opening line of the chapter ‘’The Lord appeared to Abraham’’(4) is seemingly at odds with the immediate verses that follow and it is only in verse 13 that Abraham’s interaction with God resumes. Midrashic tradition seeking to resolve this issue therefore embellishes the opening of chapter 18 in the following way:

The Lord appeared to Abraham…He looked up and saw three men standing over against him. On seeing them, he hurried from his tent door to meet them, and bowed down. [Turning to God] he said: “My God, if I have found favour in Your eyes, do not leave Your servant [i.e. Please wait until I have given hospitality to these men].” [He then turned to the men and said:] “Let me send for some water so that you may bathe your feet and rest under this tree…”(5)

It is also from this episode that we derive the Rabbinic principle:  “Greater is hospitality than receiving the Divine Presence.”(6) Faced with the opportunity to speak to God or welcome guests, Abraham in seeming defiance of the Divine and yet ultimately of course with Divine agreement he opts for the latter.

In a recent article by Professor Ben Zion Katz he expounds a plain reading of the text in the opening of chapter 18 which sees God Himself as one of the personified guests that Abraham welcomes. This resolves the seeming disparity between the opening verse and those that follow. The reason that the plain reading has been overlooked is of course the desire to avoid anthropomorphic imagery considered problematic by later authorities but is certainly plausible.(7) On either reading the implication for our question, as to how to discover a love for the stranger, is to recognise the face of the Divine in the other. As the 20th Century Jewish philosopher Emmanuel Levinas has it: ‘’the respect for the stranger and the sanctification of the name of the Eternal are strangely equivalent.’’(8)

The Torah cautions us regarding our behaviour towards the stranger no less than 36 times.

There is a significant difference between two places in the Torah where the treatment of strangers is referenced. In Exodus we read: ‘’You shall not wrong or oppress a stranger’’(9) whereas in Deuteronomy we read that: ‘’You must love the stranger’’(10). For the former we can rely on avoidance, it is a negative injunction whereas the latter is an affirmative requirement in which we are called on to seek out the stranger and show them favour. In both instances reference is made to our own experience, albeit in our collective memory ‘’for you were strangers in the land of Egypt.’’(11)

Nechama Leibowitz, the celebrated Israeli Bible scholar commenting on this ethical imperative points out that the Torah cautions us regarding our behaviour towards the stranger no less than 36 times. She contends that empathy is an outgrowth of our experience, ‘’We are bidden to put ourselves in the position of the stranger by remembering how it felt when we were strangers in another land’’(12). The difficulty in this of course is that whilst appeal to collective memory is well and good it may be hard for people to relate. Rashi perhaps in addressing this difficulty of relation comments on the verse in Deuteronomy by quoting the following: ‘’Do not taunt your fellow with the blemish that you yourself have.’’(13). The understanding that he offers is that in a sense we are all strangers to each other, we may all easily relate to each other in our common human frailty. To begin to reach out and bridge the chasm between self and other we should not first tarnish with the faults that we too possess and we may then indeed find a love for the stranger.

There is perhaps a way to draw on collective memory in a way that we can more easily relate to. Robert Alter, the American professor of Hebrew and comparative literature, refers to the peculiar misidentification of those who were not there who are of course in the majority as a ‘slide of identification between one generation and another’. This he argues is a powerful way of laying the experiential foundation for the Torah’s central injunction to love the stranger. Through the redactors’ shrewd rhetorical strategy they train us in the mechanism for satisfying the Torah’s exhortations on the stranger and just as we have transported ourselves beyond time’s boundaries to occupy the realm of our enslaved ancestors so too we are aided on a journey beyond the boundaries of ethnicity, nation, socio-economic circumstances and language that separate us from the world of our contemporary strangers.

A love for the stranger indeed requires us to reach out in empathy to the other. Whether we draw an understanding of that empathy through association with our common faults or through a reference to a shared common sense of history, entering into the eyes of the other is what is key, walking in their footsteps to understand their mindset is the common denominator.

As more normal human interaction following the pandemic resumes the opportunity to reach out to the stranger in love is an ethical imperative now as great as when the the biblical injunction was first codified.

(2) See Pesach and the Plague of Loneliness