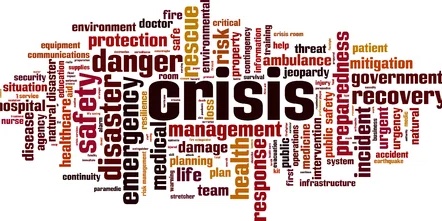 There is one word that has predominated in the headlines, on news stories and in our social media feeds over the past couple of years more than any other and that is the word: crisis.  This is not of course just in relation to the pandemic. There is the environmental crisis, the refugee crisis, the inequality crisis, the healthcare crisis, the supply chain crisis, the racism crisis, the cost of living crisis  and various crises that have hit certain sectors such as fisheries, agriculture, hospitality and tourism to name a few.

These have all ultimately contributed as Elif Shafek has said to an ‘existential angst’(1) so much so that even our digital spaces have become ‘primarily emotional spaces’. The posts that go viral are the ones most freighted with negative emotion, particularly those that play on our vulnerabilities. Unlike fear which generally has an external threat in mind, angst is more ubiquitous and subtle. It is as Heidegger has said about ‘’being in the world as such.’’ The world that we inhabit today is indeed one that exacerbates our anxieties.

Unlike fear which generally has an external threat in mind, angst is more ubiquitous and subtle.

What is Judaism’s response during times of crisis?

In Chinese, the ideogram for crisis also means an opportunity. This is a powerful, indeed energising framework within which to respond to difficulties faced. It is a somewhat reminiscent approach of my orthodontist who would say ‘’there are no problems there are only solutions.’’ To see a crisis as an opportunity is a sure footed way to embrace troubles rather than be derailed by them. Hebrew however goes one step further still as the word for crisis – ‘mashber’ also means birthing stool. We read in the book of Kings:

‘’They said to him, “Thus said Hezekiah: This day is a day of distress, of chastisement, and of disgrace. The babes have reached the birthstool [mashber = crisis], but the strength to give birth is lacking.’’(2)

The Jewish approach to a crisis therefore is to embrace it as an opportunity for birthing or realising something new. The Israeli poet Yehezkel Rahamim adapting this theme writes:

I fell to my knees to gather
Shards of a horizon shattered to bits. Only
Then did I lift my head
to inhale into the depths of my heart the
entire canopy of the stars(3)

The second approach to a crisis according to Judaism is the title of one of the late Rabbi Lord Jonathan Sacks’ early books and also a line that the Queen said of her late husband, The Duke of Edinburgh in her Christmas message and that is the quality of having ‘’faith in the future’’.(4) Perhaps the supreme example of this attitude in a Jewish context is that of Rabbi Akiva, on witnessing the desolation of the Temple:

‘’R. Gamliel, R. Elazar ben Azarya, R. Joshua, and R. Akiva… were walking towards Jerusalem. When they reached Mount Scopus [from which it is possible to see the Temple Mount], they tore their clothing. When they arrived at the Temple Mount, they saw a fox running out of the area where the Holy of Holies had been. They began to cry, while R. Akiva laughed. They said to him, “Why are you laughing?”…. He replied, “Isaiah the Prophet said, ‘I will bring two reliable witnesses regarding my people, Uriah the Priest and Zecharia ben Yeverchyahu.'”(Isaiah 8:2)… the verse in Isaiah makes Zecharia’s prophecy dependent on Uriah’s. In Uriah’s case, it is written, “Therefore, because of you, Zion will be plowed under like a field.” (Michah 3:12) In the case of Zecharia, we find, “Yet again, elderly men and elderly women will sit in the streets of Jerusalem…. Now that I have seen Uriah’s prophecy fulfilled in full detail, I know that Zecharia’s prophecy will also be fulfilled.” Hearing that, R. Akiva’s colleagues said to him, “Akiva, you have comforted us. Akiva, you have comforted us.”(5)

Rabbi Akiva’s hope in the face of adversity is the Jewish response to a crisis. It bolstered his colleagues and has remained the central thrust of the tradition’s approach even in the very heart of darkness. Rabbi Kalonymus Kalman Shapira, the Grand Rabbi of Piaseczno (1889-1943), for example commenting on the parsha of Shoftim in 1941, even as he himself was witnessing utter destruction all around writes:

‘’This is the meaning of “Be guileless (sincere) with God your Lord.” Even if you are broken and oppressed, nevertheless be whole. Take strength in God your Lord because you know that God your Lord is with you in your suffering. Do not attempt to project into the future, saying, “I cannot see an end to the darkness,” but simply accept whatever happens to you, and then you will be with God, to be His portion. Then, naturally, your salvation will draw close, for, as Moshe said (Deut. 9:29), “They are Your people and Your inheritance.”(6)

Faith in the future may well be needed for more than just one or even several generations but this outlook is indeed the Jewish way and is certainly the greatest gift that we can bestow to our children.

Judaism’s focus on resilience is a great antidote to this ‘cynicism trap’.

There are unquestionably those who are drawn to cynicism. It was the playwright and polemicist George Bernard Shaw who once quipped ‘’the power of accurate observation is commonly called cynicism by those who have not got it.’’ A century later the cartoon character Lisa Simpson echoing these sentiments with her remark that ‘’as intelligence goes up, happiness goes down.’’ Perhaps as some would have it cynicism is the price worth paying for being right. As a recent survey found, 70 percent of people think that cynics are smarter than non cynics. In fact as the Professor of Psychology at Stanford University, Jamil Zaki, has found, the opposite is the case. In research that he has conducted ‘’cynics tend to perform less well on cognitive tests than non cynics, they earn less money and lose more often in negotiations.’’(7) As he argues it still has a powerful pull over many and this is because our stories about each other become self-fulfilling. Cynics therefore hurt others to avoid being hurt themselves and through their mistreatment of others, they create the exact conditions that they fear. ‘’Cynics,’’ as Zaki contends, ‘’tell a story full of villains and end up living in it’’.(8) This is what he terms the ‘cynicism trap’ which his Neuroscience lab at Stanford investigates.

Judaism’s focus on resilience is a great antidote to this ‘cynicism trap’. A powerful piece of wisdom from Proverbs puts it as follows: ‘’Seven times the righteous man falls and gets up, While the wicked are tripped by one misfortune.’’(9) In expanding on the meaning of this Rabbi Yitzhak Hutner in a letter to a former student of his he explains: ‘’The unlearned think this means, “Even though a tzaddik falls seven times, he will rise.” The wise know well that the meaning is: “Because a tzaddik falls seven times, he will rise.”(10) This indicates therefore that the falling itself is for the sake of a greater ascent. Perseverance through a crisis, doggedly working through issues and bouncing back from setback after setback are what is key to arrive at ultimate resolution.

Jacob, who of course becomes Israel and the name that our people bear, led a life of perseverance. The pursuit of his Father’s blessing, his labour working for his deceitful uncle for fourteen years in order to earn the right to marry his beloved Rachel, his struggle with the angel at night to list but a few examples. It is perhaps telling that his name derives from ekev meaning heel. As Rabbi Eliyahu Soloveichik once pointed out: ‘’the heel is the lowest  portion of the body, yet, at the same time, it is the first part of the body used to take a step forward. In other words, it is precisely one’s initial downfall that can ultimately emerge as a key to progress.’’(11)

As we enter the new Gregorian calendar year, 2022, there are many crises that are still lurking and no doubt fresh ones that we will face. The Jewish response is to reverse the cynicism permafrost and turn these crises into opportunities for renewal, to maintain faith in the future and to approach whatever may lie ahead with resilience.