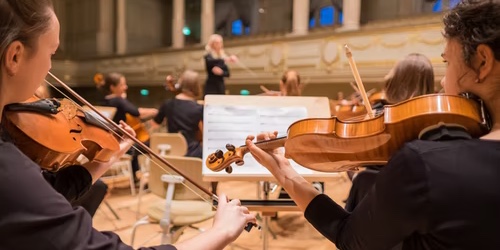 It was extremely distressing to learn of the siege last Shabbat in the synagogue in Texas. The horrifying stand off with the attacker was brought to an end when Rabbi Charlie Cytron Walker threw a chair at the gun-wielding assailant and was then able to escape with the other hostages. On this occasion, it was the terrorist, Malik Faisal Akram, who was the only person to lose their lives. The debate now rages as to his motivations whether it be fundamentalist Islamic ideology or his mental health. Whatever the conclusion, It would be all too simplistic to regard the event as some have done, as a triumph of humanity, a tale of bravery. As the columnist and author Ayaan Hirsi Ali has argued, it is unfortunately a sign that we have let our guard down and there is still a threat that looms large.(1) If this could happen in a synagogue in the United States then frankly it could happen anywhere.

On that day, in that shul, for the congregation of Beth Israel in Colleyville, Texas, the music temporarily came to a halt. Since the Taliban’s seizure of control in Afghanistan, its music has remained completely silent. As they did back in the 1990s once again the Taliban have effectively banned music across the country. This weekend in London’s Barbican, two musicians, inspired by the traditional music of the region, perform an invigorating improvised collaboration in a concert to raise awareness for the plight of Afghanistan and its musicians, who now live in terror.

On that day, in that shul, for the congregation of Beth Israel in Colleyville, Texas, the music temporarily came to a halt.

It would be unbearable to imagine a world without music. In the late polymath, George Steiner’s Tritones and the Three Majestic Tongues he sets out an imaginary conversation between a musician, a mathematician and a poet each defending their respective positions as to the greater claim to profundity. It is the musician who opens pointing to the limitation of language and appealing to music as the opportunity to reach beyond our empirical lives: ‘’Listen to the andante sostenuto of Schubert’s Opus 163. The fact that we can neither explain rationally nor verbalise coherently this reaching into ‘otherness’ points precisely to the limitations of all discourse. In a Bach fugue, or to an almost suspect degree, in a Mahler adagio the immediacy of the transcendent, the wealth of felt meanings in the unsayable are manifest to us.’’(2)

Jewish tradition certainly recognises that link between music and the transcendent. Indeed we learn in the the Book of Kings: ‘’as the musician played, the hand of the Lord came upon him.’’(3) The Book of Samuel also gives us an inclination as to the powerful effect that it may have as we recall ‘’a band of prophets coming down from the shrine, preceded by lyres, timbrels, flutes and harps…..speaking in ecstasy.’’(4)

In the podcast this week for Yitro, Professor Benjamin Sommer explores the ambiguities inherent in revelation. It is only music that can possibly give us an allusion as to how ambiguities may be reconciled. Further pointing us in this direction is the philosopher of music, Victor Zuckerkandl, who wrote, ‘Hearing a melody is hearing, having heard, and being about to hear, all at once. Every melody declares to us that the past can be there without being remembered, the future without being foreknown.’ It is as if to say that musical notes contain the possibility of what was, is and will be all at once!

We mainly encounter music in the bible ‘’to express the full range of human emotions, consciousness and experience’’(5) On giving birth to Samuel, for example Hannah sang. In the depths of depression, and with an evil spirit upon him, Saul would call upon David to play the harp for him which would restore his soul and dispel the evil spirit. Deborah sang following the victory of the Israelite forces over Siserah. Judith celebrates the defeat of the Assyrians with song and dance accompanied by hand-drums.

Perhaps the most remarkable musical event ever recorded in literature was the Song at the Sea, the poetic tribute to Israel’s momentous deliverance from the pursuing Egyptians. This was the people’s first act together since their departure from Egypt and through their song and music a powerful union was achieved.

I remember some years ago on holiday with my family in France. We had joined a Sephardi minyan on the Shabbat morning and heard a psalm sung to the beautiful melody of erev shel shoshanim. That evening in a restaurant, one of us round the table asked if we could remember it. I started humming it quietly without any desire to draw further attention but little by little, the tune ignited a chain reaction throughout much of the restaurant as other tables joined in. There we were for a brief few precious moments, Jews, heralding no doubt from a whole variety of different places, united in song.

Only music can touch the inner recesses of one’s soul in such a way.

Rabbi Avraham Trugman has spoken of music’s appeal on the one hand to the ‘’universal, transcending race, religion, culture and era while on the other hand (capturing) the particular essence of a specific culture, religion and era’’(6) So much music that I am drawn to is due to my own particular circumstances and upbringing. I am haunted by the melodies of the Kol Nidre service. I am uplifted by the songs that we sing at our Passover seder. I am moved by John Williams’ theme tune for Shindler’s list played so magnificently by the violinist Itzhak Perlman. Each of these musical encounters stirs my soul and immediately enables me to draw on earlier, often childhood, memories. Sometimes they might kindle my imagination to reflect on episodes within our collective memory. This is the particular and specific power of music.

Henry Wadsworth Longfellow called music ‘’the universal language of humankind’’. And yet, perhaps this is not always so. I have sat almost in pain listening to Chinese opera as much of the Chinese audience present were enthralled. In a study carried out in Montreal, groups of Canadians and Congolese Pygmies were played music from each other’s cultures. The results demonstrated that while there were similarities in how the two groups responded emotionally to the basic musical elements of tempo, pitch and timbre, there were also broad differences in the preference of music, the judgment of quality whether good or bad and extra-musical associations. This highlights  that perhaps the question of universality does not receive a simple affirmative or negative answer and that the truth lies somewhere in between.(7) Through learning about the music of different cultures one can certainly come to a greater appreciation. Ultimately perhaps music is always subjective.

Years ago on a visit home from studying in Israel, I took an earlier than expected plane to surprise my family and arranged a cab. I shared with the driver what I had been doing and how I had become particularly taken by a certain genre of music – hasidic nigunim. I took the liberty to take out a CD and start playing it. Before long I noticed an emotional reaction to the evocative notes as the driver welled up. Only music can touch the inner recesses of one’s soul in such a way. Here in my cab going home was a prime example of what Arnold Bennett said of music –  “a language which the soul alone understands but which the soul can never translate.”

As George Steiner says in his Tritones ‘’Only music can make in some existential, even sensible the possibility of experience beyond experience.’’(8) Perhaps this is what the Psalmist understood when pointing to the music of creation itself:

”The heavens declare the glory of God
The sky proclaims His handiwork
Day to day makes utterance
Night to night speaks out
There is no utterance
There are no words, whose sound goes unheard”(9)

The Taliban may be able to eliminate musical instruments for now but what it will never be able to do is to crush the very music of creation. Maybe in really hearing that music we may all come to understand as Rebbe Nachman declared that: ‘’music is the foundation of true attachment to God’’.