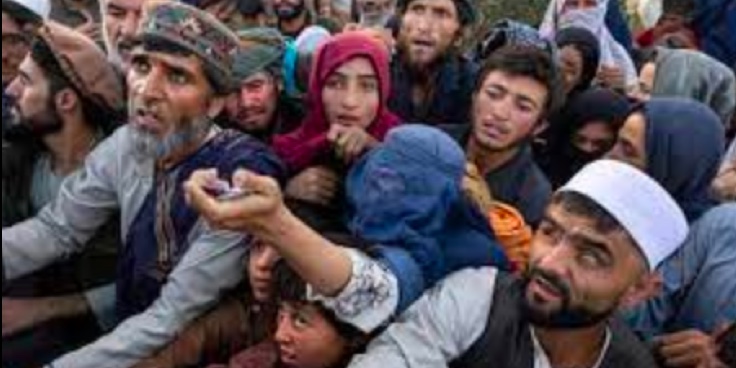 It has been heart-wrenching to see Afghanistan fall into the hands of the Taliban. Of course the corruption and incompetence of the previous government, who the Taliban so easily swept aside offered the Afghan people little hope either but it is truly devastating to see once again Afghanistan in the power of those who adhere to the strictest interpretation of Sharia Law. We remember all too well their rule a little over 20 years ago replete with public executions for convicted murderers and adulterers, amputations for those guilty of theft and their huge array of human and cultural abuses.

There are those who say that their return to rule this time will be different. Their more conciliatory tone however must surely be taken with more than a pinch of skepticism. Viewing the scenes of women throwing their babies over the barbed wire fence at Kabul airport in the hope that British servicemen will save them as they face beating is a tragic image of the fear that has been struck into the core of so many.

Judaism insists that we should not be by-standers in the face of suffering. The memory of our own oppression is too deeply etched into Jewish consciousness for that.

Malala Yousafzai, the Nobel Laureate and women’s rights activist who, as a child was shot by the Taliban for defending her right to education has spoken of her deep concerns particularly for women and girls under the new regime. Her words that ‘’this is an urgent humanitarian crisis’’ must be taken seriously.

As we look on at the tragedy unfolding I am reminded of the prayer that Abraham Joshua Heschel uttered: ‘’O Lord, we confess our sins, we are ashamed of the inadequacy of our anguish, of how faint and slight is our mercy. We are a generation that has lost its capacity for outrage. We must continue to remind ourselves that in a free society all are involved in what some are doing. Some are guilty, all are responsible.’’ His call to action was of course in relation to the civil rights movement. Those struggles he was confronting lay on his doorstep but the world has become smaller since then and our level of concern must certainly reach Afghanistan. As America and Britain turn their back on twenty years of involvement in the region our first response must be a call to action – of lobbying our leaders to help enable a safe passage of the most vulnerable and of course to support the welcoming of refugees into our communities.

Judaism, and Heschel’s words demonstrates this, insists that we should not be by-standers in the face of suffering. The memory of our own oppression is too deeply etched into Jewish consciousness for that. Of the scant biography given about Moses three early episodes recorded are telling. On seeing an Egyptian beating a Hebrew he struck down the oppressor.(1) When he saw two Hebrews fighting one another he sought to intervene.(2) Finally when he saw that the daughters of Jethro were seeking to water their flocks and the Midianite shepherds sought to prevent them, it was Moses who came to their rescue.(3) In all three instances what Moses’ reaction shows is the importance of not idly standing by as he witnesses the injustices. He has truly embodied the learnings of the question which Cain asks ‘’Am I my brother’s keeper?’’(4) Judaism’s answer as Moses first demonstrates is in the affirmative. Time and again we are urged to ‘’uphold the cause of the fatherless and the widow and to befriend the stranger’’(5). As Professor Rabbi Judith Hauptman has shared the Torah’s grand and glorious mandate (is surely) ‘’Justice Justice shall you pursue!’’(6)

With the Taliban in power once again and another instance of fundamentalist religion operating under the ‘’cloak of sanctity over the politics of hate’’(7) the second Jewish response is one that must call to account a literalist application of our sacred texts. None of the Abrahamic traditions are immune from this sort of sabotage and we should urge an engagement with problematic texts.

We know from our own tradition that legal systems are intended to develop and change over time and in this way as Professor Judith Hauptman has said ‘’Torah evolves to fulfill its own ideals’’. A key example of this is the Torah’s elastic clause in Deuteronomy ‘’do as they, the Priests or Levites or judges instruct you, do not stray to the left or the right’’ which was then interpreted by the Rabbis of the Talmud as saying that we should abide by the rules enacted by the judges of our own time(8). Halachah, as Rabbi Ethan Tucker has said has ‘’always been about applying an eternal Divine will to the shifting facts of life.’’ With such an approach ‘’the performance of a given act in one context may achieve a specific goal, while it may fail to do so – or even act contrary to that goal in another context.’’(9) This is indeed how our tradition over time has done away with capital punishment or animal sacrifice despite both appearing often in the Torah itself.

Our second response must also reject a version of faith which claims a monopoly on truth. The fundamentalism that Rabbi Dr Louis Jacobs fought throughout his career is of course of a different nature to the fundamentalism that we encounter in this instance. Nonetheless it is worth highlighting his questing approach, as perhaps best exemplified in an Open University lecture from 1977:

Yes, we admit, there is an element of vagueness in our approach but we believe that it is better to be vaguely right than definitely wrong,

Judaism, rightly understood, has always been in the nature of a quest, a determined search for ways in which the new can be assimilated to the old, in which the past can render fruitful the present. Yes, we admit, there is an element of vagueness in our approach but we believe that it is better to be vaguely right than definitely wrong,

Middle Way philosophies have not been in vogue for some time, perhaps on the grounds of lacking the certainty after which some crave or alternatively lacking the courage of more reforming tendencies. The quest on which Jacobs embarked is though an appeal to our best efforts, to walk tentatively, with humility and a journey of partnership with the Divine. This is the voice of faith, accompanied with doubt that needs to usher gently forth in a world so often filled with a cacophony of competing claims to the absolute truth!

Looking at Afghanistan a mere 20 years since the Taliban last held power, we may well be forgiven for succumbing to despair and thinking that the world is destined to repeat its same mistakes. Judaism urges us even in the midst of despair on a course of hope. I am reminded of a famous midrash in which, a group of angels are debating the merits of human creation:

Rabbi Simeon said: In the hour when God was about to create Adam, the angels were divided into different groups.… Kindness said, “Let her be created, and she will do good deeds.” But Truth said, “Let him not be created because he will be all deceit.” Righteousness said, “Let them be created because they will do righteous deeds.” Peace said, “Let them not be created because he will be all quarrelsome and discord.” What did God do? They seized hold of Truth and cast it to the earth, as it is said, You “cast truth to the ground” (Daniel 8:12). Then the angels said to God, “Why do you despise your Angel of Truth? Let Truth rise out of the earth, as it is said, ‘Truth springs out of the earth’.

It’s written, “And God saw all that They had made and it was very good,” and behold Adam was good. Rav Huna Rabbah of Tziporin said: While the angels were still arguing one with the other, God created the human. They said to the angels: What are you arguing about? Adam has already been created.(11)

It is God’s belief in humanity that is paramount here. Whilst angels may dispute amongst themselves and we may lose faith with each other, God’s belief in us does not waver. It is this belief that should give us hope.

The paths available to us today are still those as set out before the Israelites prior to entering the land: ‘’I have put before you life and death, blessing and curse. Choose life’’(12) May we all choose life!

Our response to the scenes that we have witnessed this week then are to stand up for justice, to champion a faith content with more questions than answers and to never lose a sense of hope!